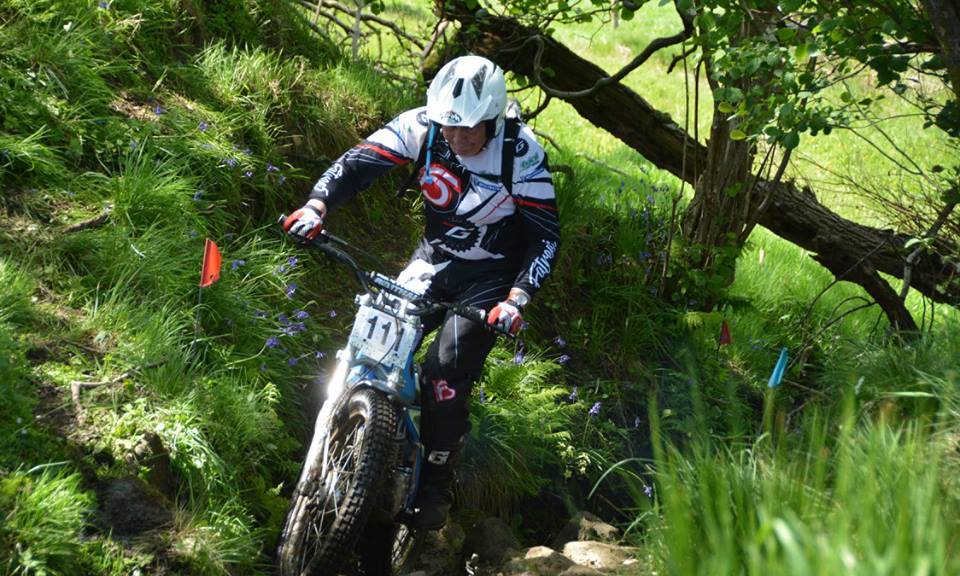 Trials Guru is the Premier Trial Sport Website for photos, articles, news and the history of motorcycle trials.

All businesses featured in ‘Useful Links and Partners’ do not pay any advertising charges or fees to Trials Guru.

This website is not run for profit or any financial gain whatsoever.

Welcome to the world of Trials Guru! – “It’s All About Motorcycle Trials” – sums it up nicely – ‘Trials Guru’ is not a person, it is a place on the internet for you to read the history, articles, news, facts and information from the sport of motorcycle trials world-wide … we believe in Quality, not Quantity.

John Moffat: “I’m the person that created ‘Trials Guru’ in 2014. I don’t profess to be a ‘guru’ it is the name of the website.
The site is to record the sport of trials for posterity, that is what we do.
With the input of several contributers we aim to preserve as much information on the sport for posterity and future generations.

The most famous rider in the history of the sport, Sammy Miller MBE once told me: John, I like facts, not stories, everyone has a story, I like the guy who brings facts to the table“.

What is ‘Trials Guru’?

Since it’s launch in March 2014, Trials Guru has been assisted by a variety of contributors.
Photographers such as: Jimmy Young, Heath Brindley, Neil Sturgeon, Iain Lawrie, Jeremy Whittet, Heather Mead, Kim Ferguson, Ian Robertson, Sarah Turner, Linda Ashford, Chris Sharp, Ray Crinson, Rainer Heise, Chris Sharp Jaxx Lawson @Joats Imagery, Colin Bullock/CJB Photographic,  Mike Davies.
By very special arrangement, we have some images from Eric Kitchen and Barry Robinson.
With contributions from Justyn Norek, whose work is also displayed on other websites.
Much of their work is displayed on the various ‘sections’ on Trials Guru.
Just click on them on the ‘Home’ section and you will see what we mean.
Trials Guru is also delighted to have contributors: John Hulme, Mike Rapley and Sean Lawless (Lawless Media UK) sharing their literary skills, being sporting journalists in their own right.
Many thanks to Tommy Sandham for his contribution in the Honda Trials ‘section’.
We have collaborated directly with the Todotrial website in Spain, owned by the enthusiastic trials rider, Horacio San Martin, whom Trials Guru’s John Moffat has known since 2006 when they rode together at the Robregordo Classic Two-Day Trial near Madrid.
Friends ever since, Trials Guru made available the ‘Rob Edwards Story’ which you can read in Spanish on Todotrial.
We have in the past collaborated with James Brown and his retrotrials.com website to link you to some articles of personalities from the sport of trials.
With special thanks to contributor/collaborator, Joan Forrellad of the Honda Trials Story website for his support.

Special sections or pages are covering major annual events like The Scott Trial, Scottish Six Days Trial and specific people such as Rob Edwards and areas in the UK and overseas, such as the North East, South West and Germany.
We’ll try to bring you high quality articles, carefully researched on trials and trials people from around the globe, whenever possible.
There is always something new on the go.

“The past is a different country, they do things differently there”

Presented with a mixture of exciting, and in many cases un-seen, colour and black and white images, this publiocation is in A4 size format with over 100 pages of informative and interesting text.

This is a book which explores and describes in words and photographs, competitors and enthusiasts from motorcycle sport in Scotland and more! It’s about people, places and events from this era, the endeavours and performances by motorcycle sports most respected riders, who were either born or brought up in Scotland.

A book which will convey you back to a time-period when Scotland produced not only British, but also European and in some cases World championship contenders. Riders who endeavoured to create performances, which proved they were serious competitors in racing, trials, enduro, and motocross.

This is a book aimed at the motorcycle enthusiast.

There will be a donation to the ACU Benevolent Fund from the free proceeds of this publication. The ACU Ben Fund was established in 1951 and is a registered UK charity for the benefit of motorcycle club members who have fallen on hard times. (The first donation of £200 was made on 23rd July 2015).

Full details of price, how and where to buy copies of Motorcycle Sport Scotland 1975-2005 : Here

Who is behind Trials Guru?

‘Trials Guru’ was created by Scotsman, John Moffat, a trials enthusiast for over 50 years. It was an idea that dates back to 2003, but only came to fruition in March of 2014 when Trials Guru was set up online.

John Moffat’s family have been involved with motorcycle trial sport since 1949, but the connection with motorcycles dates back to the early 1920s with William Moffat of Innerleithen, Peeblesshire, Scotland. He was a baker by trade in the family business of Thomas Moffat, Baker & Confectioner, eldest of the brothers, William owned a Douglas and an H.R.D. His two brothers, also bakers, James and Thomas Arnott also had road going machines.

William did his courting on his Douglas. His son also Thomas ‘Arnott’ had his first introduction to motorcycle sport in 1932 when the late great Jimmie Guthrie, the Norton factory road racer from Hawick used to make use of the public roads in the Scottish Borders for practice for the annual Isle of Man TT races.

Young Arnott was wakened one morning very early by his father and told to get dressed and come down to the ‘Pend’ or alleyway to the bake-house in the centre of Innerleithen.

Young Moffat wasn’t disappointed, before long a motorcycle came into view, travelling at racing speed, seconds later the rider flew past through the town, without slowing for the bends. It was only a glimpse, but the sight of Guthrie at full chat was enough to inspire Arnott to want a motorcycle.

To say that Guthrie was his hero is probably an understatement, the name ‘Guthrie’ is still spoken in hushed and revered terms to this day, such was the man’s stature.

In 2017 T. Arnott Moffat’s memory was preserved when a motorcycle road run was created in the Scottish highlands. Read about it on the page: T. Arnott Moffat Memorial Highland Road Run

We are always interested in positive feedback to improve this facility. Feel free to leave your comments as a guest or via the ‘contact’ page or contact space on some articles and pages.

Who is funding Trials Guru?

Trials Guru is privately funded. It is not sponsored or supported by subscriptions or charges of any kind and does not rely on selling anything or charge for advertising space. Access to Trials Guru is free of charge and is non-commercial. Please note: The businesses featured in ‘Useful Links and Partners’ do not pay any advertising charges or fees to Trials Guru. This website is not run for profit or any financial gain whatsoever.
We do what we do, for the promotion and recording of history for the sport of trials.

We don’t have the facility to provide a platform for bike or equipment sales, check out our ‘Useful Links‘ page for bike dealers and bike sales specific websites. We do not charge for this service.

So there you have the whole story of how and why this website was created, ‘Dedicated to the Sport’ sums it up nicely.

Trials Guru, some interviews and meeting colourful characters from the sport of motorcycling – it’s not all trials:

It was produced in a limited quantity of 1,000 copies back in March 2005. Whilst it is now out of print, you may still be able to obtain a new copy by following the link below to The website of The Magazine Man, operated and owned by Brian Ashley in Stoke on Trent. This book was published by the now defunct Ariel Publishing, Brian Ashley of The Magazine Man, is the official distributor of the book and was financially responsible for the initial print run of 1,000 copies. Ariel Publishing did not pay for the printing of the book in 2005.

Ferry Brouwer, Yamaha Race Technician and former Arai helmet importer Europe: “This is a very interesting book, one which every Scottish enthusiast should have”.

Please Note: No part of the book ‘Scotland’s Rich Mixture’ described above, is reproduced in part or otherwise on this website.

To obtain a copy, follow this link: The Magazine Man link

John Moffat, sometimes referred to as ‘The Moffster’; is also guest presenter on Nevis Radio, Fort William during the Scottish Six Days week in early May. Trials Guru has personal connections in the sport worldwide.

From time to time links are placed on ‘facebook’ and ‘twitter’ social media merely to alert readers of new material.

‘Gu’ – means shadows..
‘Ru’ – he who disperses them..
Because of the power to disperse darkness..
the ‘Guru’ is thus named.

Trials Guru website is based in the United Kingdom. Its purpose is to record information about the sport of motorcycle trials for posterity. It is a non-commercial venture.

We do not collect or maintain records of any personal data or process personal data whatsoever in any format, electronic or otherwise. This web facility does not identify users, contributors or photographic owners other than the owner’s name and where agreed, their general domicile excluding address or postal codes. Photographs displayed are the intellectual property of the photographer named in the captions. There are ‘contact point’ features which enable the user to ask questions and make general enquiries to the website operator. We do not collect, retain or store users’ personal information, including e-mail addresses, for any purpose. When replying, e-mail addresses supplied by the enquirer are deleted after use and are not passed on to any other data processor or person. No data is collected for statistical purposes other than those provided by the host website platform provider. No individual user is identified.

Issued by the Intellectual Property Office

12 thoughts on “ABOUT: TRIALS GURU”