The AMC factory Competition Department retained both AJS and Matchless competition models from the production line for factory supported riders use and the use of the factory supported teams. The Matchless Trials Team was disbanded in 1957, leaving AJS as the factory representation in national and trade supported trials where team entries were invited by the organisers. In some cases trials machines were registered as a 350 Matchless, but were liveried and used as an AJS when in factory ownership. 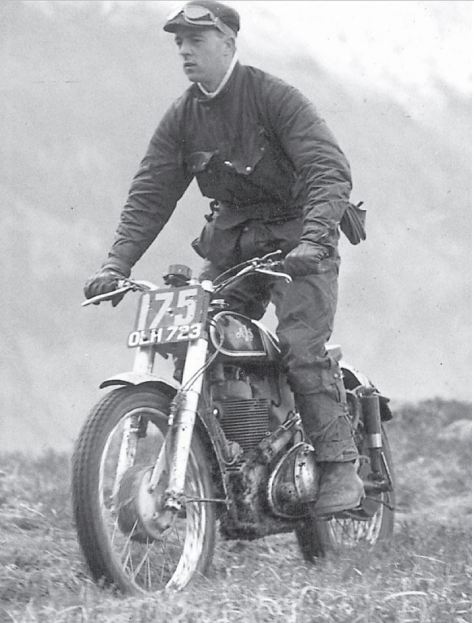 Robin Andrew on board his ex-factory Matchless, fitted with an AJS tank.

Information on OLH723 from Robin H. Andrew: “My first introduction to trials was when I was called up to do my National Service. I was lucky enough to get into the RMP as a motorcycle Instructor based at Aldershot, we had a very understanding  commanding officer who let us ride our Army bikes (Matchless) in the civilian and army trials at the weekend. My biggest success was winning the Southern Command Trial in1953, the only trouble was I hadnt noticed that I had lost my rear stand and was debited 3 marks which took me down to runner-up position. On leaving the army I went back to work in the local James and AJS Dealer who I persuaded to sponsor me with a James Commando. I then progressed to an AJS which was a good machine. Then one day my friend Gordon Mclaughlan told me that works rider Artie Ratcliffe was selling his works Matchless for I think £135. I managed to persuade my sponsor to buy it for me to ride. The only problem was that it was a Matchless not an AJS, so I bought a new AJS tank and they were non the wiser! What a differance the works bike was to my over the counter model. It had more ground clearance, more low down power and many other things. I rode it in the SSDT and managed to get a Special First Class award. The bike was OLH723 I often wonder what happened to it, if it is still around it will be worth a lot more than £135 I paid for it in 1957”. – Robin Andrew

More articles and information on the machines built in Plumstead, England will appear here over time. 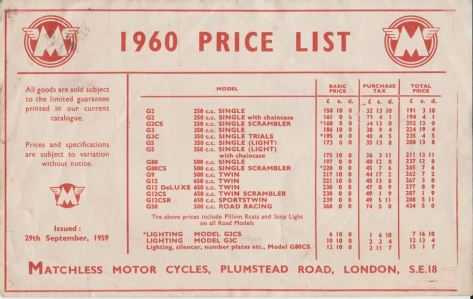