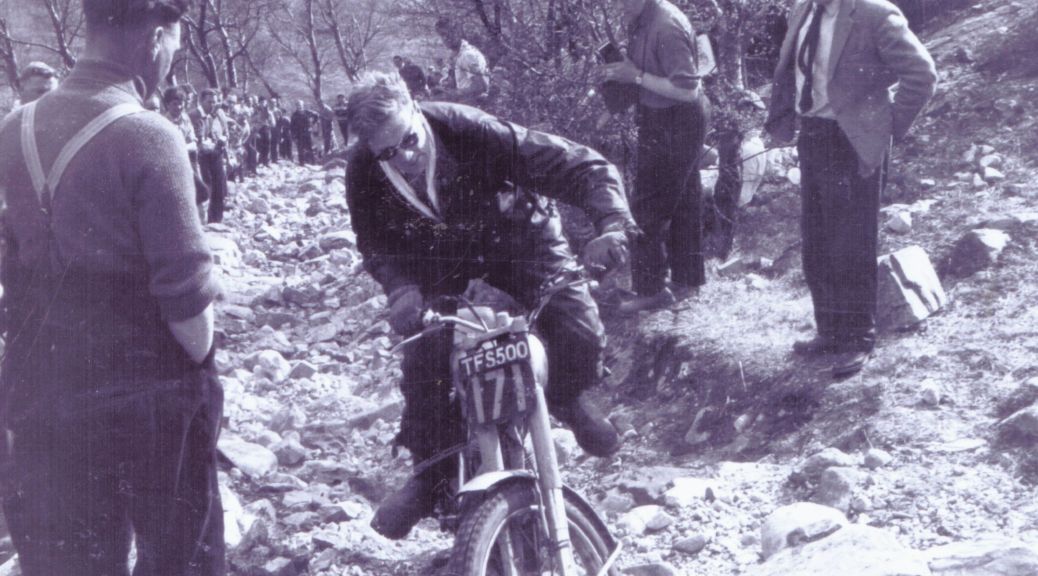 We are always looking for something different from the world of trials and we have discovered an absolute jem.

By kind permission of Mrs. Ishbel Clarkson, we have been granted access to a journal kept by the late John Noble Clarkson, formerly of Skirling, Biggar. Clarkson’s journal gives us a unique insight into how trials events were organised in the late 40s and early 50s in Scotland.

Mr. Clarkson was a keen Scottish trials rider and was Assistant Clerk of the Course of the Scottish Six Days Trial for many years. He was also Secretary of the Edinburgh St. George Motor Club (‘The Ace o’ Clubs’ was its motto). Motorcycles and Jowett cars was his passion and he was also secretary of the Scottish section of the Jowett Owners Club for many years, owning various models including a Jupiter and Javelin.

So without photos, here are the extracts from John’s journals dating back to the late 1940s:

Course: Starting from Dechmont Filling Station on the Edinburgh – Glasgow road, the first sections encountered were ‘Silvermines’ (East to West) and down to ‘North Gully’, then on to ‘Candie House’ and a tight hair-pin on the coal bing near Candie House. From there over to ‘Muckraw’ and ‘Kyber Pass’ and back to ‘Silvermines’. Standard machines are allowed a bonus of 8 marks. Of an entry of 63 riders, 52 finiahed, 5 retired and 6 were non-starters.

The results were as follows:

Course: Starting at Lamancha Filling Station, the course innediately took to the hills by Ruddenlees and Wester Deanhouses, then along the old drove road to Noblehouse, along the main road to Romanno Mains and over the hill to Flemington.

Much more to come shortly.