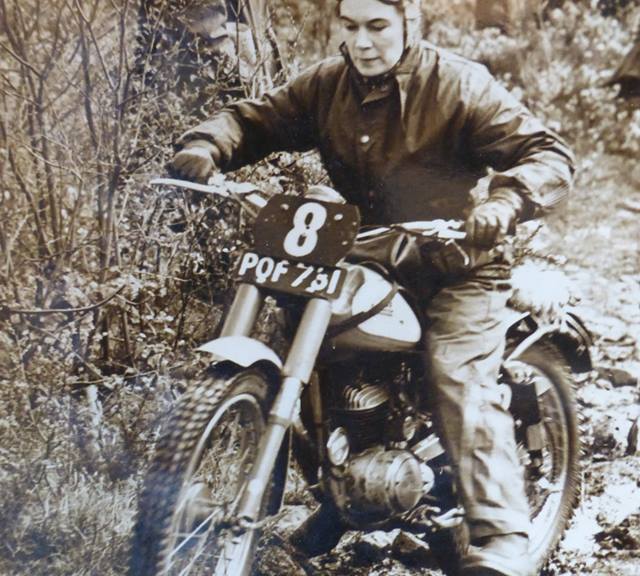 In my early teens in Hampshire, friends and I would cycle out to watch off-road events at Weavers Down, and also the Greybeards Trial that would come by our house annually. Although I never got the opportunity to ride off-road properly (that seemed to be reserved to farming families), the bikes fascinated me. However that was all put behind when the magic age of 16 approached and we all began to get road bikes. My first biking was dirt tracks on a road BSA C15 250cc belonging to a friend but by the time my birthday in 1970 came I had my own (at the princely cost of £10), and had already notched up a lot of road miles when parents weren’t looking. Roll on the years and one awful Brit bike after another, but they had to go in favour of a car for work and family. In my early thirties I was able to get an old bike again and my passion for tinkering with, “restoring” and researching the, by now, ageing British marques, revived and gradually gained pace. Off-road interest got as far as owning a nice 1951 AJS 18CS but that was used very much for road riding, taking me as far as Poland for a rally on one occasion.  A CCM came and went and that of course had lots of off-road associations, but again, I never really had the opportunity so never tried…

After forty years of fairly heavy duty and demanding work, and with kids now grown up and away, retirement at the age of 61 meant I suddenly had time on my hands. I had written a lot of stuff, including two books, in relation to work matters, so writing came easy. I also habitually read up on anything that tickled my fancy – often following up on tasters from the classic bike magazines: makes, bikes and personalities. That was where I came across Olga Kevelos, but, to my surprise there was no book.  Further research also revealed that her story was a good one and that a book was overdue if not too late as she had died in 2009. At that point I knew not a single person who had been acquainted with her in any way – not being part of the Trials fraternity didn’t help in that respect.  What I turned up in those initial stages back in 2016 was fascinating, not least because it revealed a complex personality whose own spin about herself had led to a certain amount of myth – the biggest one being that she won two ISDT Gold Medals (she actually won one but thought she should have won another – you’ll have to read the book to find out more!). She was also a “looker”, and had clearly used her feminine charms to the utmost to lead an unusual and very full life. 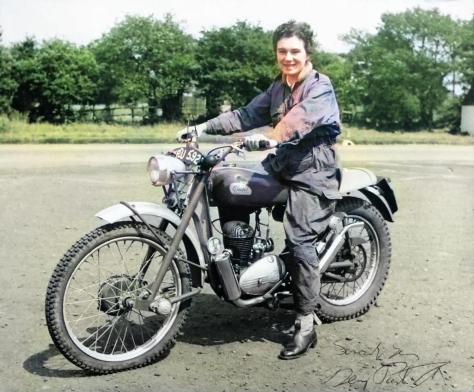 The project of writing a book about Olga would probably have got no further than a magazine piece had researches not turned up a hoard of memorabilia on Ebay; this had been found, long abandoned, by builders renovating the Kevelos family home in Birmingham.  Using up some of my hard earned savings I managed to get quite a lot of this – several boxes full of old programmes, results sheets, letters, photographs and odds and ends. This included one or two tasty items but the valuable stuff – her trophies and medals – had long ago been “collected” after her death in Kings Sutton, Oxfordshire. I also made an appeal through the magazines for information and memories, and this turned up some fantastic results, putting me in touch with individuals like Michael Martin, whose well known motorcycling family were from the same neighbourhood as Olga and knew her very well.  Gradually the information came together although gaps and mysteries remained.  Sensitivities also emerged – Olga had, shall we say, an interesting sex life, and many of the personalities of the day fell victim to her charms although few seemed able to remember for one reason or another!  Her vibrant personality clearly made its mark on the Trials scene in her day, especially the Scottish, and the Midlands district – which she helped organise for several years after her retirement from the sport as a rider.

Researches over a year long period turned up enough information to describe Olga’s unusual background and childhood (her father was from a wealthy Greek family), and wartime experiences including the Birmingham Blitz and service on the canals (which never quite lived up to her childhood passion to become a seagoing buccaneer and marry Errol Flynn).  Her motorcycle sporting career started soon after the war through men she met at her father’s restaurant in the city centre of Birmingham, and it was soon clear that she had a talent even though she had never ridden prior to the age of 23. Trials was her forte and favourite, and of course it was open to women unlike other areas of motorcycle sport at that time.  During her years of activity she was associated with numerous makes but in particular the James and CZ factories.  She tried her hand at road racing, scrambles and car racing – showing pluck and determination in all that she did.

Olga ended up running a pub in Oxfordshire along with her brother Raymond. Those years too were eventful and enlivened by her character. She was a TV “Mastermind” contestant and a pub quiz aficionado until the end of her life. I called the book “Playing with the Boys” because that quote of her sums up exactly what she liked doing: she didn’t see herself as a feminist or pioneering woman even though her exploits offer example of both.  I feel fortunate, even though I never met Olga, to have had the opportunity to provide an account of her life. 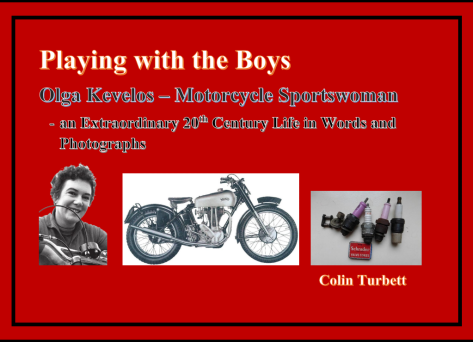 The book was self-published and like many such enterprises (I now know!) suffered from layout issues and marketing difficulties despite efforts to widen exposure. I had two-hundred and fifty copies printed and they are nearly all sold. Having had some errors pointed out (thanks to Olivier Barjon!) and with new information to hand, a further edition might be worthwhile. However this time it would have to involve a publisher and one (who produced a more recent motorcycle book by me) has already said no, so this may or may not go anywhere – maybe a case of watch this space!

5 thoughts on “Olga Kevelos and Me”