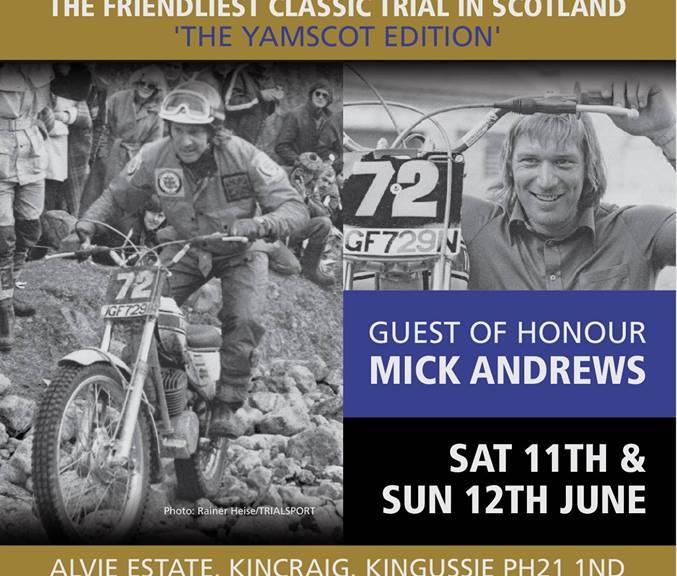 The Highland Classic 2 Day Trial in Scotland has been overwhelmed with entries this year.

The trial is organised by the go-ahead Inverness & District Motor Cycle Club Ltd at the highland shooting estate, Alvie which is situated four miles south of Aviemore.

Originally an idea of club chairman, Malcolm H. Smith as a Pre’65 event back in 2003 for Scottish riders who were unsuccessful in obtaining an entry for the Pre’65 Scottish, it was increased by taking in twin-shock entries in 2005 and increased to a two-day event the same year.

In 2013 the introduction of a ‘guest of honour’ from the sport of trial saw Yrjo Vesterinen and the Bultaco team from the 1970s seriously increase the events profile and the number of riders fill the 130 maximum.

Last year the entry was closed only five days after opening, such was the event’s popularity. The guest was former Greeves rider Bill Wilkinson and in 2014 it was Dave Thorpe. The 2016 is the ‘Yamscot’ Edition with former Yamaha factory rider and five times SSDT winner Mick Andrews who will ride a specially prepared Yamaha TY twin-shock.

Entry Secretary Rick Lound has been swamped by entry forms this year. “I live way out in the countryside and the postie has had more envelopes in one day than he has all week!”

Yorkshire born Lound has taken over the task this year from Inverness man, Dave MacKay who steps down after 28 years service to the club.

Chairman, Malcolm Smith is a gun-dog trainer and estate shooting consultant who has close ties with the Alvie Estate and the Highland Field Sports Association.

Smith said: “We have been aware that our trial is becoming the event to take part in, but we have to limit the entry to ensure that the infrastructure can cope. We are quite a small club which punches above our weight. We have a small team of enthusiasts that are keen to keep the trial popular and to live up to it’s title as the friendliest classic trial in Scotland and probably now the United Kingdom”.

Malcolm continued: “We are all proud of the event and more importantly so is the Alvie Estate Laird, Jamie Williamson and his staff. The clerk of the course has no intention of increasing the events severity, we have a winning formula and have no plans to change that. We are keen to make only detail changes to enhance rider experience of competing on ground that is usually preserved for hunting and shooting activities”.

At the time of this report, the entries officially closed on Tuesday, 23rd February and was oversubscribed by over 50%. An entry list will be released by the club after competitors are all advised of their entry being accepted.