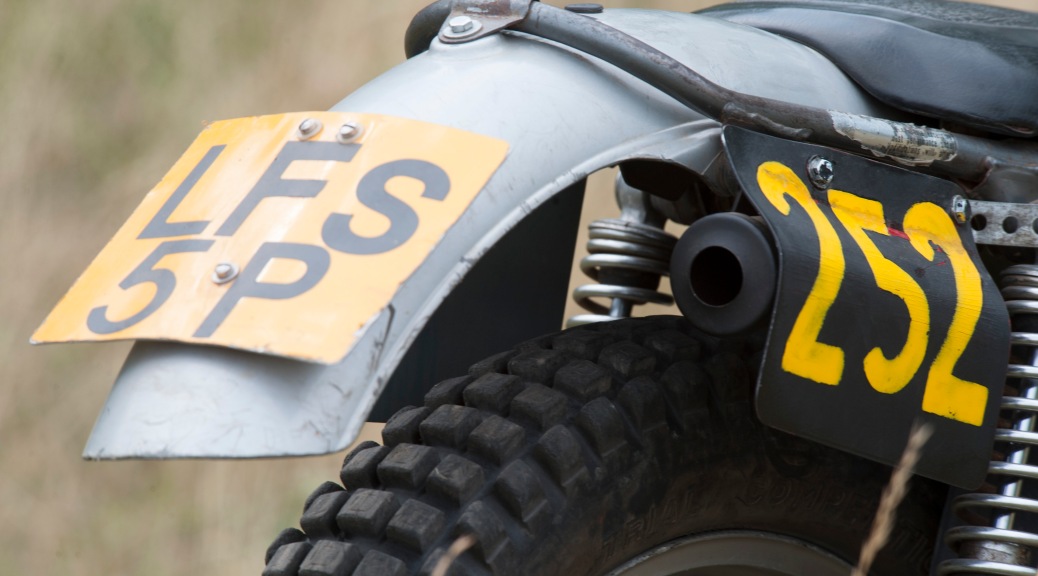 John Hulme: “Names are usually registered and remembered when you make a note of something that interests you, and the name Carlo Ramella was one that I had taken on board. It was many years ago, when my interest for collecting trials sales brochures from 1965 onwards started, and this man Carlo Ramella had send me a really nice letter asking if I could help to find some machines after he had seen my ‘wanted’ advert for sales brochures. I emailed him and he sent me a list of machines, I think around 20 years ago. Around two years ago Justyn Norek Jnr contacted me to tell me he knew where there were many interesting machines we could test for my publications, and the collector’s name was Carlo Ramella. If you receive Classic Trial Magazine you will have seen some machine tests on motorcycles from his collection. When Justyn mentioned this ‘Scottish Honda’ I thought it would be quite appropriate to use the test, so please enjoy.

As an introduction to the Honda TL 250 test we will let Carlo Ramella take up the story as to how he came to be in the position to add this machine to his collection.

Carlo: “I have always had a fascination for all Honda trials motorcycles, and several variants of the TL models occupy my collection. I have a special place in my heart for the four-stroke machines, and their association with my trials hero Sammy Miller whose prototype caused such a sensation in the sport. When Miller moved to the two-stroke Bultaco from Ariel in 1965 it killed the big British machines forever. Miller can also be held responsible for the significant year, 1965, that would return in more recent times with the new class for Pre-65 machines. Word has it that Miller designed the world-beating Sherpa T trials model in one week, and its modern lighter weight and easy to ride two-stroke attributes changed the course of the trials motorcycle forever“.

Carlo: “The purchase of the Honda TL 250 came about when I spotted a web advertisement in 2009. My excitement came when I found out it had a competition history with it and the fact that it had been ridden in the Scottish Six Days Trial. I quickly contacted the seller Alan Jones who confirmed that this was the machine belonging to Derek Edgar, who had competed on it in the 1977 SSDT. The details of the email were: ‘Carlo, this machine competed in and finished the 1977 ‘Scottish’ and was ridden by Derek Edgar. The attached photo shows Derek on the machine registration number LFS 5P. Regards, Alan’. I could not believe it, such was my elation at finding a machine with such a sporting heritage!”

Carlo: “However, Alan didn’t want to sell the machine outside the UK and he wanted to avoid all the hassle with paperwork, customs, packaging etc. I am well accustomed with international goods transportation due to my job and know many truck drivers and haulage companies, so I told him that I would take care of transportation, asking him to provide some protection of delicate parts such as the cylinder head, aluminium fuel tank, carburettor, etc. Eventually I managed to convince him to sell me the machine; we agreed a price and I arranged the shipping. When the Honda arrived I had another ‘dream’ in my garage, and it was exactly as I imagined: still with the ‘Scottish’ markings, all original, including the riding numbers for the event. I started the engine and it was so sweet, despite its age. So it was another dream fulfilled, and I rode it in many classic events before this test with my good friend Justyn Norek Jnr.”

Justyn: “Like Carlo, I am a keen Honda trials enthusiast and especially four-strokes. When Carlo asked if I wanted to test the Honda it was a very easy ‘yes’. Having ridden many Honda trials models it would be interesting to test this one as it was the model which started the adventure. The venue would be one I am very familiar with, at Puy village in the Italian Alps. Carlo has some accommodation here and I also knew his love of red wine would make for good after-dinner conversation! As with most Hondas it started with a soft use of the kick-start lever. I was surprised that it started first time due to its age but the ‘clockwork’ engine was as sweet as a nut, with a very nice ambient exhaust note. I had a quick warm up and it once again confirmed my love of the four-stroke engine“.

JN: “The hazards we tested on I have ridden before, such as the river and rocks. I entered the fast flowing river and once again the superb suspension found on most Honda trials models was evident. This machine is over thirty years old and yet the suspension’s action is still very good. Despite its obvious heavy weight it handles pretty well, but you do have to be precise with your movements. Straight-line riding is okay but you have to pre-plan any sharp corners, such is the weight factor that you have to always take into account. The super-soft power delivery makes up for the handling and, as always, the feel good factor is immense“.

JN: “Out of the river and riding the nearby by river banks is where it’s the happiest as it feels very confident on this type of terrain. The relationship between the fuel tank and seat is very comfortable. Performance wise it could do with around another 100cc as, on very steep climbs, it simply runs out of power. The brakes were once again very good, considering the machine’s age, and as with the majority of Japanese motorcycles the gear selection was very ‘slick’ and positive. As with other machines from this era the clutch is not really for use in the hazards“.

JN: “In conclusion this model is one which needs to lose so much weight to be competitive but that’s maybe why we see so many Honda ‘Special’ trials machines. It’s a pleasure to ride and the quality standard is very high. Sammy Miller worked his magic on the Honda TL 250, producing the Miller Honda which took Rob Shepherd to the British title in 1977. As the rain came down we retired for a lunch of grilled meat and a glass of red wine, and the topic of conversation took us back to the winning years of Sammy and Rob Shepherd“.

Who is Derek J. Edgar?: He is the younger brother of three times Scottish Trials Champion and former Clerk of Course of the Scottish Six Days Trial, Norman F.W. Edgar. Both sons of Norman Edgar senior who had a motorcycle business in Edinburgh (Edgar Brothers) and were DMW, Bultaco, AJS and Honda agents. Derek Edgar worked for Puch Motorcycles and then Montesa Motorcycles in the USA, before returning to live in Scotland to set up his company ‘Derek Edgar Developments’.

He wanted another crack at the SSDT when he was still in the USA and as his father Norman Edgar Snr had imported from the USA under Derek’s direction and assistance, a brace of two TL250s in 1976, a machine was sitting waiting for him to use, registered in Edinburgh as LFS5P.

The other machine from the personal imported batch was LFS4P, purchased at one time by author, Tommy Sandham who had a liking for Honda trials machines. Sandham described the TL250 as: “… heavy, had low ground clearance but was the most fun you could have with your trousers still on“.

Sandham loaned LFS4P to his friend Kenny MacNamee who rode one of the first motorcycle enduros to be held in Scotland, at Rhins on the Galloway coast in 1978. The TL250 was a fine general purpose off road machine, perhaps heavy and low for trials, but for the early enduros, a handy bike to have!

Derek Edgar is now retired to Linlithgow with his wife Theresa. Their daughter Kim Edgar is a well known musician. We hope to bring you the full story of the Edgar Brothers in 2017.

Our thanks to Carlo Ramella, Justyn Norek Snr & Jnr., Tommy Sandham and John Hulme of Trial Magazine UK for this article.