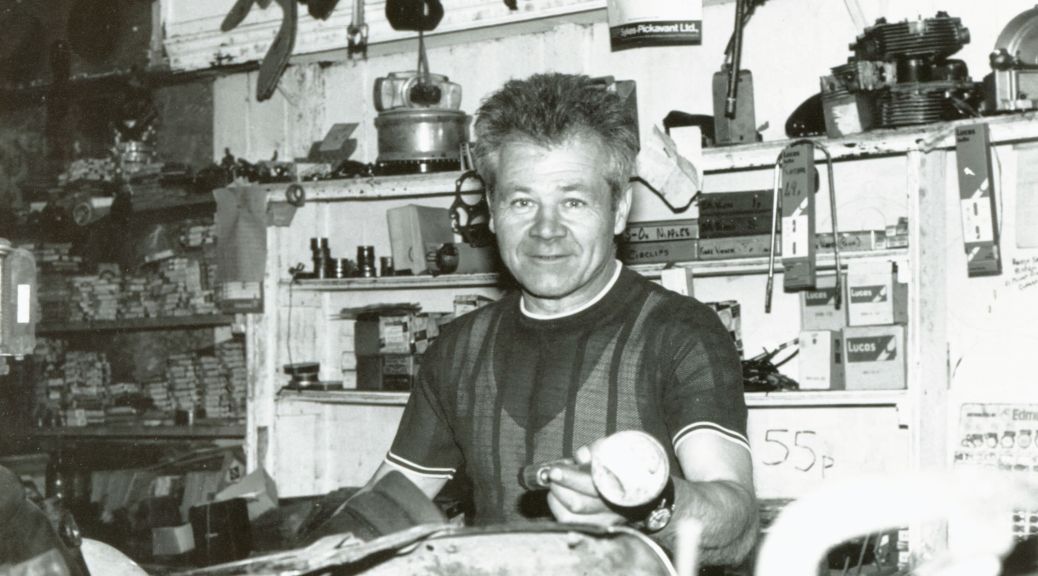 Trials Guru is always searching worldwide for interesting facts, figures, articles and photos from the world of trial, past and present for your enjoyment of our sport. That is why we say that Trials Guru is ‘Dedicated To The Sport’.

‘The bike Willie built’ is no exception, it’s a domestic story pertinent to Scotland and features a man called Willie Pitblado, a mildly eccentric, but very interesting character from Fife and specifically the historic town of Dunfermline. This article is by way of a tribute to ‘Willie Pit’ as he was known, a true enthusiast.

Pitblado was a time served painter/decorator who was also a keen trials rider and a motorcycle enthusiast of note. He was born into a family of thirteen children.

He was a former rider, then official at the Scottish Six Days Trial, a life-long member of the Dunfermline & District MCC and a lover of the highland village of Rogart in Sutherland, where he found his bride Ann.

Pitblado rode a variety of machines including a Greeves which he acquired in January 1961, registered WWS415 which had factory connections. He rode this Greeves in the SSDT.

Willie had an idea to build a special machine of his own, using a Triumph 3TA twin cylinder four-stroke motor that he prized from a road machine and his plan was to fit it in a Sprite frame. The Sprite was a fairly new brand, sold in kit form.

Pitblado thought for a name and using his own surname and that of the Sprite brand, he came up with The PITRITE.

The PITRITE was registered in Fife with the number DSP47D in April 1966. It was destined to be ridden on loan by a variety of riders, but its ownership was not to stray further than Pitblado’s extended family base, namely that of his nephew, Willie Gillespie.

Trials Guru’s John Moffat on Willie Pitblado: “I met Willie Pitblado when I was in my early teens when my father was collecting some parts to help with the restoration of his ex-factory Matchless around 1973.

We visited Willie Pit’s shop in Dunfermline and it was in an old house on three levels. It was an old property and was literally filled with bike parts from all makes and ages. I was surprised that Willie said to my father to go rake around until he found what he was looking for, we literally got the run of the place, but I learned that that was not how Willie usually did his business, far from it. Apparently Dad and Willie had known each other for many years and had a respect for each other, hence the freedom afforded to us.

“Years later, I was restoring a 1954 Matchless G3LS road bike and I needed the correct tank, wheels and a few more odds and sods. I drove over to Dunfermline from my parents home in Whitburn, West Lothian and again I went to Willie’s emporium.  He was at his counter with his old Alsatian dog and greeted me with ‘Hello Mr. AJS what can I sell ye today?” I explained that I needed parts for a Matchless to which he quipped: ‘They are both the same, just badge engineering’. Of course Willie was right.

I was about to be told to go look myself, but ‘watch the dog disna bite ye’ – when a man arrived behind me in the shop. He wanted a camshaft for a Triumph Bonneville, to which Willie asked what year? The man gave the year and Willie turned around and pulled one from the shelf behind him. ‘That will be £25’. The man said, ‘Would you take £20?’ Willie replied, ‘no, I’ll take £30’. The man looked astonished and said: ‘Hey, you are increasing the price!’ Willie replied ‘Aye, and you are trying to reduce it, now do you want this camshaft or no, because I have one and you dinna! Now either pay me what I want or get oot of my shop!’

The man paid Willie the £30 and left without another word.” 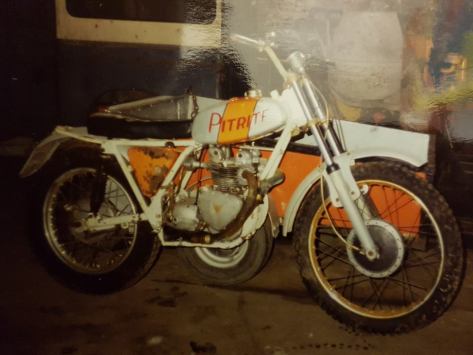 Willie Pitblado was instantly recognisable on the public highway as his vehicle was either blue with the white cross of St. Andrew across it depicting the Scottish Saltire or he had a white vehicle with blue doubled ‘go faster stripes’ up the bonnet. If you waved at Willie on the road he would always give you the ‘peace’ sign, symbolic of American bikers of the era!

10 thoughts on “The bike Willie built”