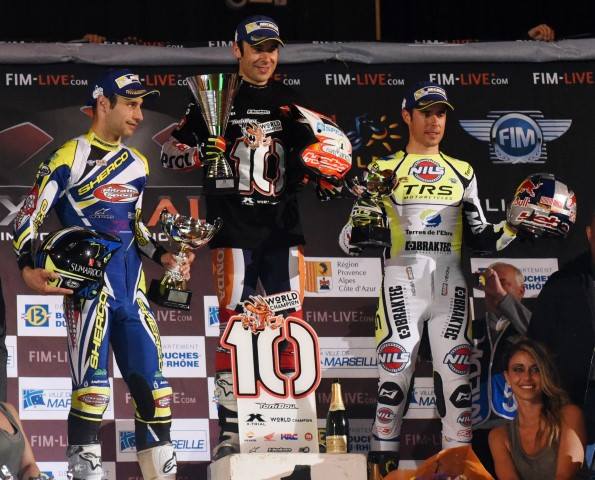 Toni Bou – Repsol Honda made it ten titles in a row with a faultless display at the final round 2016 FIM X-Trial World Championship in Marseille, France. Bou overcame some initial nerves during qualification to then go on to dominate the final with a totally clean performance. However Toni’s route to his tenth straight crown in this series was anything but easy as the title fight went to the very last section of the night.

Albert Cabestany – Sherco pushed Bou hard throughout the evening and was a worthy runner-up on the night. Adam Raga – TRS had to finally be content with third place as the Spanish trio finished well clear of eventual fourth placed Takahisa Fujinami – Repsol Honda. The final order in the general standings amongst the main three protagonists was confirmed as Bou, Raga and Cabestany respectively.

A very relieved Bou said. “I am so happy to finally take this tenth title, it just feels so incredible and almost difficult to believe. I felt so much pressure tonight, perhaps more than when I won my first title and you saw this with the mistakes I made early in qualification. Thankfully I recovered with some better riding and in the final it was the perfect way to finish the championship with a completely clean lap.”

Qualification – Wild card rider Jaime Busto – Repsol Honda stole an initial advantage over Eddie Karlsson – Montesa in the first dual lane race of the night, as the young pairing open qualification that comprised of five long and technical sections. Despite having to ride out front Karlsson showed great composure as he lost two marks in the first hazard. In contrast Busto again failed to show his true talent and had to wait until the final section to avoid a maximum score. With a total of twenty-two marks Eddie ended the night one better than Jamie as the duo finished seventh and eighth respectively.

It was a close call between Fujinami and Alexandre Ferrer – Sherco in the next head to head sprint, but it was the Japanese protagonist who got the nod. This was to prove a good omen for Fujinami as he produced his best performance of the season to finally claim a place in the final with a tally of fourteen marks. Despite great support from the noisy home fans Ferrer was unable to make it through to the main event and had to settle for sixth spot overall.

The next pairing proved to be a mismatch as Cabestany delivered an incredible ride losing just two marks after be being beaten by Jeroni Fajardo – Vertigo in their dual lane encounter. Whilst Albert’s showing would prove to put him top of qualification Fajardo endured an inconsistent outing that would finally rule him out of the final and into fifth position as he fived the last hazard on the opening lap.

A crash on the first pipe in the race as he lined up against Raga confirmed just how nervous Bou was. A further fail on the second section for Toni really showed just how tense the reigning champion was during the early part of his opening lap, but typically he recovered strongly not dropping any further marks to book his place in the final. Raga was robust in his approach throughout and only a two mark ride in the fifth hazard prevented him matching Cabestany’s score. However Adam’s tally still took him into the final in second place behind Albert, but in front of Toni.

Final – With Fujinami soon out of the hunt, it was left to the Spanish threesome to fight it out one more time. Raga found himself trailing his two main rivals early on after a below par ride in the first section in the final which was ridden in the reverse direction, as was the case with all the other hazards. Very little separated Bou, Cabestany and Raga throughout what proved to be a low scoring and tense finale meaning that the championship was not decided until the very last section of the series. Raga applied the pressure one last time with a stunning sign off ride, but with Bou matching his performance and Cabestany taking a more calculated approach Adam still ended the evening in third and just short of stopping Toni taking a tenth title.