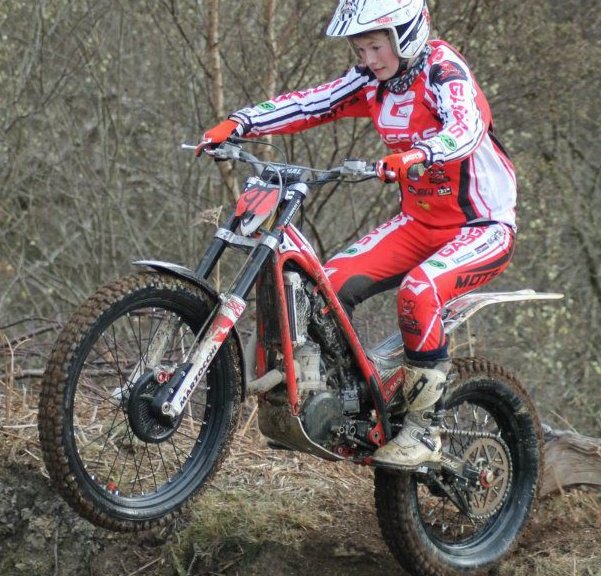 Nikita Smith is 19 year of age and comes from a family with trials connections.

“My Dad and his brothers rode a few trials back in their day.” says Nikita.

“The Middlesbrough & District MCC national Cleveland Trial runs just above our farm. When I was around two years of age, I heard the sound of trials bikes and was pointing, so my Mum and Dad took me up to have a look. It all really started from that moment, I just wouldn’t shut up about bikes. My Nan and Grandad bought me a battery bike that I could ride around the farm, but I wanted to go faster so at four, my parents bought my a Honda QR 50. I then progressed on to a Yamaha TY 80 and started to ride trials at the age of six”.

“I just moved through the classes, my parents were always supporting me and I can’t thank them enough! When I was ready to move to B class, I joined ‘Ace Trials Team’ run and financed by the Kilhams family. For me this was a dream come true at such a young age. They gave me brilliant support and they introduced me to the European and World trials scene. They showed me how everything worked, as it’s a bit different than entering a club trial! Unfortunately the Ace Trials Team didn’t continue, so I joined up with John Shirt at Gas Gas UK which was fantastic help as I progressed in my riding career.

“My cousins also rode a few trials we all live quite close so we would go practising together”.

“Unfortunately, I suffered a road traffic accident which involved head, chest and leg injuries. This has been a big set-back to me, but my goals still remain the same to ride at the top level. I am currently undergoing physio with my leg and working hard to get where I want to be, on a trials motorcycle”.

Mark Kilhams, Owner of the Ace Trial Team commented: “I approached the Smith family at the final ladies round in the Isle Of Wight as I saw great potential that was not being fully accessed. I knew that Joanne Coles would be the best mentor for Nikita and would make a great team mate. Thankfully the family agreed to compete abroad if supported in the world and European paddocks by Ace Trials Team. This was a very successful arrangement for all involved and Nikita’s achievements and potential brought in a lot of new interest and sponsorship to the team. We have kept in constant contact with the Smith family since Nikita’s terrible accident and I know that the strong-will and single mindedness that bought her so many top podium finishes, will get her back to the top of ladies trials again”.

Now fully recovered from her horrific road accident, and at the ripe old age of twenty years, Nikita Smith makes a comeback on the world stage with her first appearance since 2013 when she was fifteen.

Nikita will take part on a Gas Gas machine and compete in the newly launched ‘Trial2 Women’ class in the World trial series in Kingman, USA in August 2017.