The Scottish Six Days Trial is the most famous motorcycle trial in the world and deserves a special place in Trials Guru website.

The 2017 event was blessed with wall to wall sunshine throughout the six days and this was a contributory factor to the enjoyment of the event.

Trials Guru’s John Moffat was there from start to finish and assisted Nevis Radio with their outside broadcast presentatation every morning from 07.00 to 11.00 Monday to Friday and 07.00 to 12.15 on the final day, Saturday 6th May. He also assisted the Edinburgh & District Motor Club by interviewing riders on the finish ramp and hosted the presentation of awards evening at the Nevis Centre, Fort William. A busy week by all accounts.

“I was kept informed during the week that Doug Lampkin was still clean and my friend Gordon Blakeway phoned me ten minutes after Doug’s dab and I knew that I was sharing the record, but it hadn’t yet been beaten. If anyone was going to do it, it would have been Doug Lampkin and in my opinion he is the greatest trials rider ever, having twelve world titles to his credit and now eleven Scottish Six Days Trials.

I know that one can’t compare riders of different eras, that would be like comparing Valentino Rossi with Mike Hailwood. Doug Lampkin came close to beating my record of which I am proud, but if he had, I can’t think of a better bloke to do it. I admire him and know how much pressure he would be under last week.

I would of course have been slightly disappointed if my record had been beaten, but I don’t mind sharing it with Doug”.

Doug Lampkin (Vertigo 300) started the 2017 SSDT as the firm favourite for the win, however, other riders could not be ruled out, after all the SSDT is a six days event and anything could happen from a rider injury to a mechanical failure which could render a rider out of the event at worst or lose marks on time.

Sitting in the wings were former runners-up Michael Brown (Gas Gas) and Gary Macdonald (Scorpa) who were just as keen and motivated to grab the win. Newcomer Jack Price was also a dark horse, he lacked experience in the Scottish, but his 2016 season indicated that he had gained the skills of a winner and would prove himself as a force to be reckoned with.

Clerk of Course, Jeff Horne had taken on board the comments gathered after the 2016 event which was commented as being too severe for the clubman rider, but he had to balance that with the views of the top riders who expected the event to be challenging.

Horne: “We have listened to the post-2016 comments and we have reigned back many of the sections that caused problems last year, we have also varied the route to keep the SSDT fresh and one that riders want to ride in. Time hopefully will not be so tight as previously, but that is not a signal to hang about either”. He told Trials Guru’s Moffat when on the Nevis Radio broadcast on the opening day.

Day one saw five riders all on clean sheets, Lampkin, Andy Chilton; Jack Price; Jack Sheppard and Gary Macdonald kept their feet firmly on the rests which had enthusiasts wondering what the organisers would do if there was a tie on the Saturday, but this was not to happen.

What did happen was spectators were beginning to realise by Day 2 that Doug Lampkin could change the face of SSDT history by posting the first clean of the whole trial and the tongues were certainly wagging over this. Jordi Pascuet was just one mark behind Lampkin at this point.

By Day 3 Pascuet had posted a further two marks and tied for second place with newcomer Jack Price who was having a cracking ride, to which he resisted the pressure to become a very worthy runner-up at the end of the six days.

Local man and twice previous runner-up, Gary Macdonald, the most successful Scottish Trials rider of all time, and the highest placed Scotsman since 1935 was just off the pace and didn’t challenge Lampkin which put him down the standings to finish as Best Scot, but in seventh position on 22 marks, not Macdonald’s personal best by a long way.

During the Friday ‘Road Trip’, Thatcham’s Will McBain struck out when he clipped the kerb at Strontian, just yards from the lunch check. The Beta spat him off at only 8 mph, but he touched down on his left knee and it dislocated. An ambulance was summoned by Trials Guru’s Moffat who was only feet away and witnessed the incident. The unlucky Bain was transported to Fort William’s Belford hospital. Will, obviously disappointed, took time to visit the Nevis Radio team at Parc Ferme on the Saturday morning sporting a knee brace and crutches, he vowed to return in 2018 and had been on course for a special first.

The weather certainly made it an easier journey over the moors although there were still traps for the unwary and inexperienced rider. Fresh rear tyres were fitted a day early by many as the road temperature was doing its best to wear out tyres. Many riders also changed front tyres as a precaution. Air filters were changed every day as the dust levels were high.

Grass fires broke out on more than one location due to the tinder dry conditions with Clerk of Course Horne issuing a precautionary warning to riders of the hotter operating four-stroke machines, in case embers were discharged from parked machines, to be extra vigilant.

Victory was Lampkins, he hoisted the North British Rubber Company trophy high above his head at the Saturday presentation to the cheers from an appreciative audience which included 1969 SSDT winner Bill Wilkinson. This made it win number eleven and Doug almost changed the record book, but he equalled Jackson’s dab he didn’t beat it. It’s a record that has stood for 56 years, how many more will it be intact? We shall just have to wait and see! 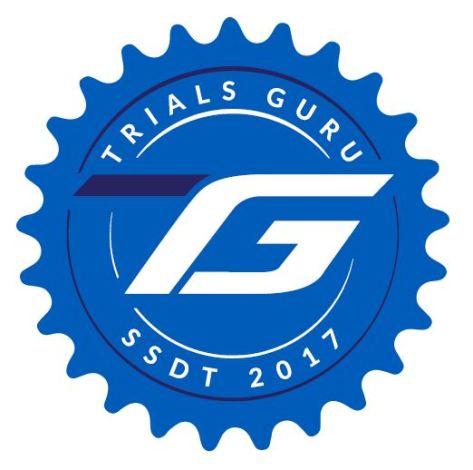