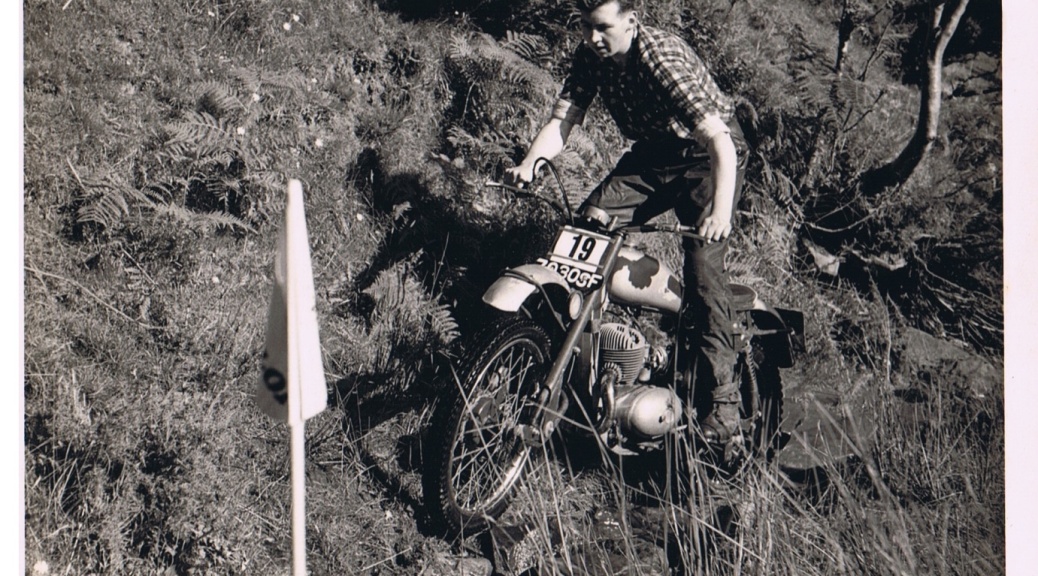 Sometimes, Trials Guru is approached by individuals who have found a trials motorcycle and are keen to discover it’s history.

We are not always able to assist due to the complexity of the task, but here is an instance where we were able to help, almost immediately upon receiving the request for assistance!

I came into contact with John Moffat at the Trials Guru website, via the Greeves Riders Association after seeking information regarding my newly acquired TE 250. John provided the key information necessary regarding its’ history, allowing me to find out more about the Greeves Scottish in my possession.

The story of my search has its roots in my long ago interest with the Greeves marque.

When I was a teenager back in 1978, my best friend had a Cotton trials machine which I admired from afar. I was keen to find something similar and after trawling the pages of the ‘Exchange and Mart’ found what was described as a ‘Greeves Scottish’ close to where I lived. The bike was great fun to ride and I always regretted selling it.

Many years passed and different bikes came and went but the Greeves always had a place in my heart and at the back of my mind I knew that I would like once again to own one, but realistically thought it would not be possible.

With no particular thoughts in mind I went along to the Telford Off Road Show back in February 2017.

As I walked down the line of Scramblers on the Greeves Owners Association stand, I stood back in disbelief, when I saw before me my old Greeves. It had stood in a barn for many years before being bought by its current owner. Furthermore I learned that it wasn’t actually a Greeves Scottish but an early ‘Hawkstone’ scrambler (I later was told that the gearing was similar enough in both Scottish and Hawkstones for the Hawkstone to be used as a rudimentary trials bike).

After returning home I found myself wishing more than ever that I had kept the Greeves when I was younger.

Unfortunately later that month a relative died, but had left me some money in their will and so it was with this incentive that I went out to look for another Greeves to own.

I decided that I wanted a ‘Scottish’ because not only could I fit lights if need be but I would have less trouble getting it through an MOT.

My search started on ‘e-bay’ and I soon found a bike I could afford. This was a 1962 model TE 250. Once delivered I put it through an MOT which it passed first go (despite having been stood unused for many years in a shed) I then joined the Greeves Riders Association and VMCC.  The GRA managed to trace my frame and engine number back to the date the bike was originally sold and it brought up an interesting anomaly. The bike had been purchased directly from the Thundersley factory by the ‘Scottish Clubman’ magazine. This was unusual insomuch as it was routine for bikes to go from the factory directly to agents or dealerships.

I was piqued and intrigued to find more about my bikes slightly unusual history.

My next stage in finding the bikes history was to ask if anyone could help on the GRA forum. It was from there that I was given John Moffat’s details by enthusiast Brian Catt.

Amazingly, John had a recollection of the bike from the registration (I luckily had the original logbook) and in no time at all, he had put me in contact with the original owner Tommy Milton Jnr. who lives in the USA.

Tommy’s father appeared in a recent article on the Trials Guru website entitled: “Great Scots, Tommy Milton – or NOTLIM, if you prefer” and it was this bike that was mentioned in the article as being given to Tommy Jnr as an incentive to excel at school.

Tommy very soon got back in contact with me to happily confirm that it was indeed his first trials machine dating from 1962 and he recounted how his Dad had rashly promised to get him a new bike if he buckled down at school.

Tommy Milton Senior was a director of the Scottish Clubman Ltd., a monthly magazine for car and motorcycle sport enthusiasts run by amateurs, and he had agreed a deal with Greeves for the bike at a favourable price in return for an article in the magazine after a few months use. Tom Junior and Senior travelled down from their home in Edinburgh to Thundersley to pick it up, which they did on a Friday afternoon. (Apparently, there is a picture of delivery being taken with a Greeves sales executive and also Robbie Allan, older brother of Vic, who was working for Greeves at the time).

On the following Saturday, Tom Jnr rode it part of the way north to run it in, and when he got home, he took off the lights and got it ready for the CSMA trial near Gifford, East Lothian the very next day. Although he was only a novice he got the best non-expert and a first class award. Two weeks later he got another first class and was then classified in Scotland as an expert. Tom Jnr also went on to win the Pinhard prize trophy for trials in 1967 – his name appearing on the trophy alongside John Surtees, Mike Hailwood, Grahame Noyce, Dave Thorpe and many other notable motorcyclists.

Tom Milton on his 1967 Pinhard Prize win: “Regarding the Pinhard, I think it is true to say that, while ‘Trials’ is shown against my name on the Sunbeam Club list, it was really a combination of other factors, such as being a long-time committee member of the Melville Motor Club and a co-organiser of their scrambles and trials events, as well as one of the youngest ever members of the Scottish ACU Management Committee, and as a result being a Steward at other club’s scrambles, that contributed to the award”.

In September 1963, Tom won his first trial, at Loch Lomond. The photograph of Tom was taken during that event – the bike has a different tank fitted now although the original is still with the bike and was obviously changed at some point to save weight.

Apparently, an article on the bike was written for the Scottish clubman magazine, and it would have appeared in one of the 1963 issues. When the magazine was wound up, a full set of back issues was lodged with the National Library of Scotland in George IVth Bridge in Edinburgh.

The next stage for me is to try and get the bike re-registered back into its original number, thereon I hope to restore it to as close to its original condition as possible. As the lights were taken off straight away I would be grateful for any suggestions as to what type of lights were fitted. Originally the bike has rock guards fitted also.

If anyone has any photos of the bike at Greeves with Robbie Allan and the Greeves staff or records showing its review in the clubman magazine I would be very grateful to hear from you via John Moffat and this site.

For more articles like this one or do you have one to share? Then have a look through Trials Guru – Dedicated to the Sport.

Use this contact form to send your message to Trials Guru: