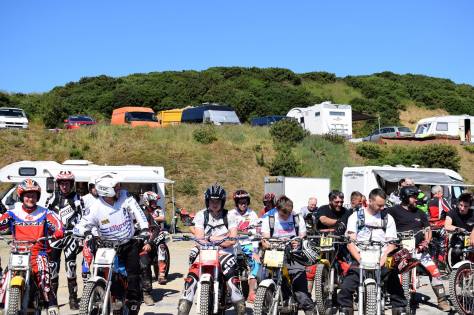 Kia series, Round 5 at Newgale, Pembrokeshire

Vale of Towy MCC did themselves proud, promoting the Kia Twinshock series round 5, which was set in the stunning countryside of Pembrokeshire on the 18th June.

The Club, have been working tirelessly for weeks clearing a lot of new ground as well as some of the existing favourite parts of what is a great venue, around a 6 KM lap with varied terrain.

Quite a few people came down on the Saturday and camped overnight as it was a six-hour drive for most, but this gave them the opportunity to explore the stunning area as well as have a gathering with friends for a beer and catch up.

Land owner, Peter Gwyther is a lifelong trials rider and he graciously allowed us to camp on his land.   No one else would have let us cut swaths of wheat and grass to ride the course.

I was told by Eirian Davies, Peter had ridden the Scottish Six Days Trial an exceptionally nice person.

The club was established around 1976, which started as a scrambles club and its founder Member, Glyn Jones, is still active and sometimes still competes. The club is based in Carmarthenshire but also has a presence in Pembrokeshire as well.  It runs trials only at present, but in more prosperous times enduros and grass track racing as well.

It has the largest membership in South Wales and is also one which suffers the least politics, as they involve all riders in from all organisations, which seems to work exceptionally well.

Membership of the club is around sixty people and at the Kia event, thirty-four attended either riding or observing so a very good turnout and great support. Eirian said he has to blow his own trumpet and said: “We all have a lot of fun together and have social evenings without the bikes, but the trials is the main hook.”  The club used to have a very strong schoolboy section, but found once they hit 18, other pastimes seemed to take over, however they ran two very successful schoolboy nationals a few years back.

There were seventy entries for the Trial which was down on the usual one hundred & twenty  on a Kia round, but the long travel appeared to have put some people off, which is a great shame after all the hard work from  the organisers in hosting the event.  A special mention has to go to Fredina Minshall, Gerry Minshall and team who run the Kia series and without their efforts would not be possible.

I also must mention a young man called Jim Waters. Jim has been riding since the age of fourteen when he started on a TY80 and now at the age of twenty, he is riding the TY175.  Without doubt he is a star in the making and as I said in my first article, one to watch for.

Jim is from Lincolnshire and rides at all his local clubs, with his dad Kim Waters who is also a rider in the Kia series.

He travels to all the Kia rounds. On Sunday 18th June 2017, round 5 Vale of Towy MCC Pembrokeshire they travelled six hours to take part where Jim won the clubman class, dropping only 4 marks throughout the day on 2 out of 20 sections of varied terrain and approximately 6KM of a lap.

It was another fantastic weekend, so a big thank you to all involved.