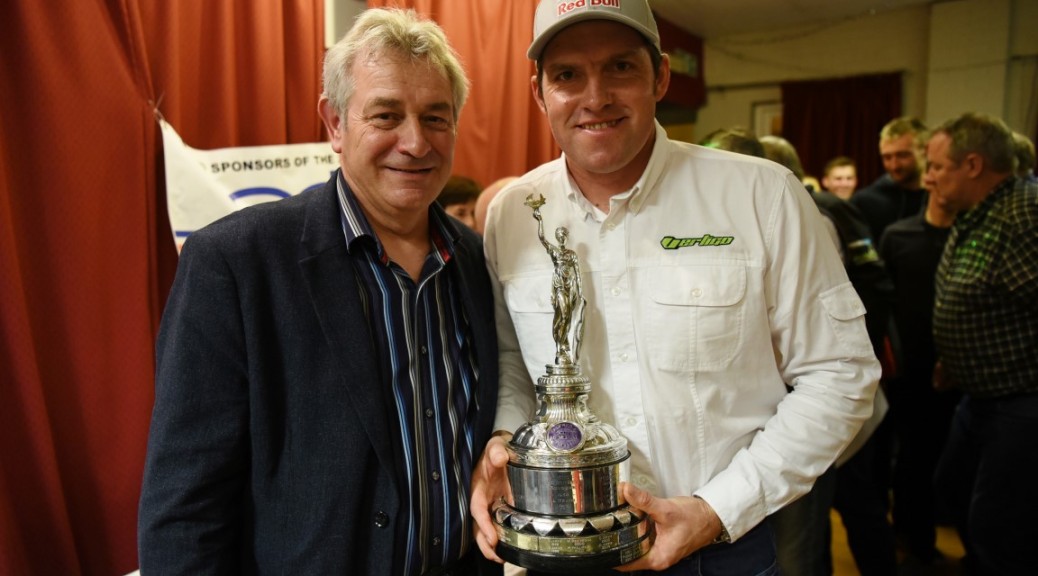 The Scott Trial 2017 is over and time to reflect on a fantastic event.

Last years’ winner James Dabill set standard time, but it wasn’t enough to take the coveted A.A. Scott Memorial trophy from 41 year old Dougie Lampkin a rider with no less than four previous wins and three fastest finishes to his credit. Lampkin made it win number five, which was coincidentally his late father Martin’s favourite number!

Dabill came home in fourth position and a Gas Gas which resembled a boiling kettle. “Fancy a brew” quipped Dabill when he stalled the motor on the finish line.

“I wasn’t sure if I had another Scott win in me” stated an emotional Lampkin at the award ceremony on the Saturday evening at around 10.45 pm when he hoisted the A.A. Scott trophy high. A trophy which has borne the name ‘Lampkin’ on 12 previous occassions.

At the start, Dougie stated to Trials Guru’s Moffat during a filmed interview that his Uncle Arthur had stated that a Lampkin should always compete in the Scott Trial, the mantle falls to Doug at this time, so we can expect DL to be riding for a few more years yet.

When Doug returned to the finish field at Feldom Lane after 3 pm in the afternoon, he was a man with doubts in his mind, that was evident. Moffat again interviewed him to get his thoughts. He stated that the ‘young ones’ had closed in on him quicker than he could have imagined during the five hours or more that he had been wrestling the 300 Vertigo over a very wet Swaledale.

There had been heavy rainfall prior to the event which used a reverse direction course, which involved a lot of zig-zagging according to one of the local landowners and the moors and overall going was soft and slippery.

Miles Carruthers from Hookwoods commented that: “I’m a southern softie, used to mud trials, but today was very muddy even by my standards, it was super slippery, but yes, I’ll be back in 2018 for another go!”

The course has to be run at least every five years in reverse direction as part of the conditions placed on the event by the Yorkshire Dales, National Park.

But it was Lampkin’s day… again. Eleven minutes late, he lost 43 marks on observation but it was 7 marks in front!

John Moffat said: “You must never, ever underestimate or rule out Doug Lampkin, he is not known as the King of Trials for no reason. He is a thinking rider, he is calculated, but can also suffer from bad luck on the day, but as the saying goes, when the going gets tough… Doug gets tougher!”

There were some other noteable achievements of course, with Ian Austermuhle taking second spot, having won in 2015 and doesn’t ride trials as often as he used to.

Fast rider, Jack Price boiled his Gas Gas, a suspected cylinder head ‘O’ ring being the likely culprit. He pushed all the way from Rotton Wood to the finish, but given that his machine had a tow-rope fitted and was seen to have been hauled up the finish field by two spectators, he was unable to be classed as a ‘bona fide’ finisher this year. So near and yet so far, but better luck for 2018.

Local rider from Skeeby, Jonathan Richardson had a bad day at the office and almost rode clean away from the finish holding area. Fortunately he stayed and commented that it was not hsi day, with problems to overcome. He finished in eighth position, being a former winner and fastest rider in the past, he was justifiably disappointed.

Scottish rider and newcomer, Duncan McColl from Glasgow who won the Mintex Trial is a man to watch for the future. He was unlucky and came off at speed, cutting his forehead and required eight stiches and a check-over for concussion, but he got round regardless and finished in 55th position.

Thanks to the Richmond Motor Club (Yorks) Ltd for putting on yet another unique Scott Trial.

The Scott Trial will return on Saturday 13th October 2018!