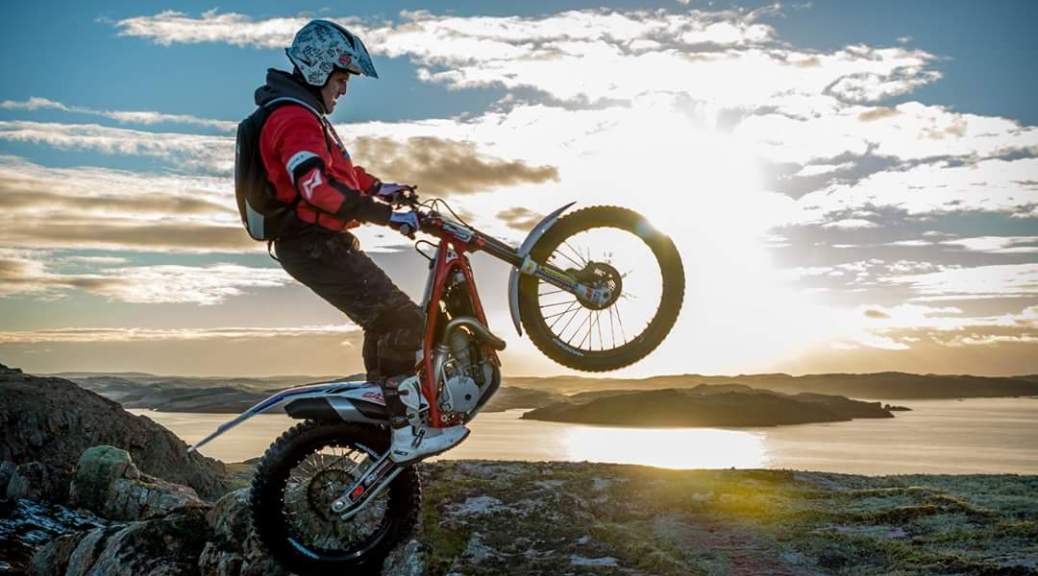 Keith Leslie returned home to Shetland last week after securing a top five place in the SACU Scottish National Trials Championships. He becomes the first Shetlander to make it into the top ten in the overall championship results since it began in 1955, a feat which has not gone unnoticed by his peers.

To commit to travelling south from Shetland for the eight rounds that make up the Championships has been a tremendous effort, along with the associated costs this brings, but he crossed the line last Sunday at Fersit, Spean Bridge to warm applause and lots of handshakes, safe in the knowledge he’d finished in the top five in Scotland in the Over 40 class, narrowly missing out on 4th place overall by just four points.
All the more remarkable is the fact that until this season began, Leslie had only visited three of the five venues that were chosen to hold Nationals, a disadvantage, with his rivals all being seasoned campaigners who’d visited each venue multiple times over the years.

Riding a Gas Gas in the Bon Accord Motorcycle Club, the first test was a ‘local’ trial, if any could be classed as such coming from Shetland. Round one is usually always held at Craiglash Quarry at Banchory on the first week of April, a place Leslie knows well having been there often. This showed in the results as when the points were tallied up he’d secured a career best 4th place, agonisingly missing his first podium by two marks!

Spurred on by that result, and after spending 4 days at the beginning of May in Fort William watching the Scottish Six Day Trial, Keith had to return there with his bike the following weekend for Round 2 at Glen Nevis. Having never really ridden those typical ”Scottish” type gulley sections, and being one of the venues he’d not visited yet, he came away delighted with a 5th place, securing more valuable championship points.

Five weeks passed until another journey south beckoned, this time as far south as he’d go all year when Galashiels was the venue for Round 3. Another one Leslie hadn’t seen yet but some solid riding on the National route saw him set off for home after securing another solid 5th place and more points.

Another five weeks passed before Keith headed away on the boat again for the Dunfermline & District club’s Round 4, Drumcarrow in Tayside was the venue this time, another new one to contend with. Some great riding on the first 2 laps had Leslie in contention for a top 3 finish, but a broken rear brake lever on the third lap meant he had to limp home in 8th place cursing the stone that had shattered his hopes as well as his brake!

Only a month at home before the Perth & District club Aberfeldy Trial in Perthshire was the venue for Round 5. Another place Leslie hadn’t visited, and for all it’s beauty it will be remembered painfully as the scene of his biggest crash of the year! A miscalculation during a steep rocky climb saw Leslie fall with the full weight onto his left leg. Had his good friend Robert James not been riding with him, we might have seen his first retiral of the season as he struggled to put any weight on his leg and had to drop more points on his last lap than he had on the first two combined. Spurred on by Robert, he made it to the end and was glad to finish 6th after his fall.

Another month of rest and physio on his injured leg saw Keith head off again, this time for Round 6 at the Inverness & District club’s Paul Kilbauskas memorial trial at Alvie Estate, near Aviemore. A place he’d visited before, and knew roughly. Conditions worsened as soon as Keith and his good friend Trevor Gibb arrived, and they knew they’d be in for a serious test. Torrential rain all morning made the burns almost impossible to ride, as foaming water meant nobody could see the line through. Seven riders had to retire with machines that had been drowned in deep water but Leslie persevered and finished 6th, securing more valuable points.

The end was in sight as only two weeks later he had to return south for the final 2 rounds of the Championship on consecutive weekends. Bob Macgregor Trials Academy at Dunlop in Ayrshire was the venue for the penultimate round, another new one for Keith but he rode solidly all day and ended up 5th overall in his class. The highlight of that weekend was seeing his good friend Craig Houston become the first Ayrshire man to ever win the Scottish Premier title for 2017.

A weeks holiday with his daughter beside family in Peterhead meant Keith travelled south feeling quite fresh the following weekend. The Lochaber club’s Grace Dignan memorial trial at Fersit, Spean Bridge was the venue for Round 8, the final round of the 2017 championships.

Rain and strong winds eased as the morning went on, but the ground was slippy and everyone seemed to be crashing Leslie included. A difficult moor crossing where the riders had to summit a Monroe before descending the other side on each lap took it’s fair share of casualties but Leslie hung in to end the trial 5th again overall, and finish 5th place in the championship, only missing 4th by four marks!!

Delighted with how his first attempt competing at National level had gone, Leslie said:

” It’s a dream come true really. Initially I had thought if I could make it into the top 10 in Scotland at my first attempt I’d be more than happy, so to have made it into the top 5 is unbelievable really, especially given I’d never seen five of the eight venues.
I only bought a trials bike when I turned forty, I watched a Julien Dupont video on YouTube and thought, i’d like one of those bikes. I’d had motocross bikes before that but had never swung my leg over a trials bike until I turned 40, and you know the saying about old dogs & new tricks! I was lucky as my good friend Gary Mcmillan helped me with the fundamentals, and we had a couple of coaching weekends from eleven times Scottish Premier Champion Gary Macdonald, and current Champion, Craig Houston which helped massively. All the people above me in the championship have been expert level trials riders in their younger days, so to be competing with them after only five years of practise is something i’m extremely proud of, if a little bewildered by.”

He continued:  ”It has cost me a lot in travel, fuel & digs but it’s something I’ll never forget. It’ll always be in the history books now. Hopefully if I secure some more sponsorship for next year I’d like another crack at it, given how well I’ve done this year.
We’ll see though, as I’ve put an entry in for the Scottish Six Day Trial next year and will find out in December if I’ve been one of the lucky ones and got in. It’s often referred to as the hardest test of machine & man in the world, given it’s duration and the amount of miles you have to cover, and is way over subscribed each year, but fingers crossed, I think it’d make all my effort this year worthwhile if I got in and had a go.”

Finally, Keith would like to thank everyone who has helped him this year: