Councillor John Blackie, the official starter of the Scott Trial for many years has died today, Saturday 13th July 2019. 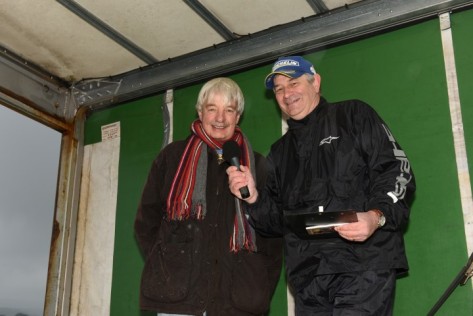 He had battled with cancer for some years and passed away in the Friarage Hospital in Northallerton. His family were at his bedside when he died.

He was a well-known figure on the start field on the Saturday morning and undertook his duties of flagging away every single rider with great gusto and enthusiasm.

His presence will be missed at the annual time and observation event, organised by the Richmond Motor Club (Yorkshire) Ltd on behalf of the Yorkshire Centre ACU.

Whilst not a direct organiser of the Scott Trial, John was nonetheless part of the valuable support the event received locally. Councillor Blackie saw the benefits of having such a prestigeous trial in the Dales each year and within the Yorkshire Dales National Park and he was instrumental in assisting the Richmond club gain the necessary planning consent to run it.

Trials Guru’s John Moffat said: “Councillor Blackie was a great guy. I always took time to interview him when I was start field commentator up until 2018 at the Scott Trial. He was a champion of all things Yorkshire and was a campaigner for trade and tourism in the Yorkshire Dales, the Scott Trial was part of that thinking. His presence at the Scott Trial I’m sure will be sorely missed as he was a great supporter and strong ally of the event”.