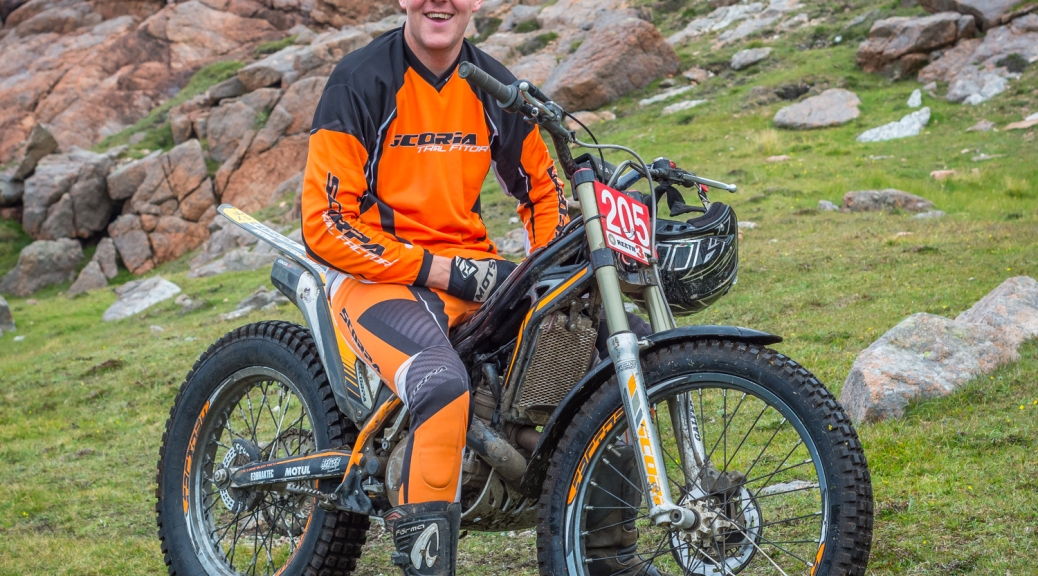 Craig Houston is the 2017 Scottish Premier Trials Champion. He is the first Ayrshireman to hold the Scottish Trials Championship Premier class since it began back in 1955.

Known in the Scottish Trials world as ‘Housty’, Trials Guru was quick of the mark to do a ‘five minutes with’ style interview with the man himself.

Craig: “My Dad, George, also a trials rider, got me into motorcycle sport, he got me a Yamaha PW50 at four years old and a Yamaha TY80 a few years later.
I didn’t compete until I was around twelve when I entered the local Stevenston and Dalmellington clubs’ trials riding a brute of a 1999 Beta Techno!
I have 2 major influences in trials, firstly school teacher, Alan MacDonald, who was not only my maths teacher but my trials teacher in the early days!
He used to throw me out of his class during the day and then I’d go out practising with him and his brother, Duncan at night!
He used to get annoyed when I called him ‘Mr Macdonald’ at trials as it made him feel old. I still do it now and again, but he is old now so it’s fine.
My other big influence is Gary Macdonald, who has helped me a lot over the years and actually got me back into trials after giving up for three years when I turned nineteen.
He’s a pretty awesome trials rider and definitely the best Scotland has seen- and probably will see for a long time yet.
My all time favourite trials rider is Takumi Narita, I think he was awesome, his riding style was great to watch and way ahead of it’s time”.

Trials Guru: What is your line of work Craig?

“I’m a mechanical fitter working in the chemical and pharmaceutical industry. My job is well suited to maintaining motorcycles which is great.
Now I’ve won the Scottish championship I want to try and do better at national events down south, like the S3 rounds and the BTC, the Scott and the big one will always be the SSDT.
I hope to string a good week together up in the Highlands one year! I am also looking forward to trying to retain the title next year against Andy Anderson, Joe Dawson and Duncan MacColl. Should make for an interesting championship in 2018!
I have to say a massive thank you to Duncan Wood at East Neuk Trials Motorcycles who has been helping me out since 2014, without him I wouldn’t be able to to do what I love so thank you very much”.

Thanks to Craig Houston for taking time out from his busy schedule and best of luck for next season, 2018.