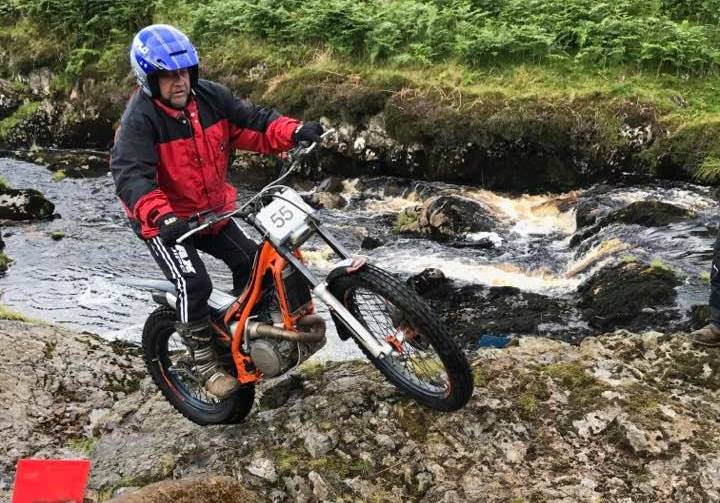 The Scottish trials community was saddened to learn of the death of Dalmellington club stalwart and keen trials rider, Michael Anderson on Monday 8th January, he was sixty years of age. He had been bravely battling cancer for some time, but throughout his treatment remained cheery and positive and continued to ride a motorcycle whenever possible.

Living at Sanquhar, Dumfriesshire, he was originally from Bishop-Auckland in County Durham. Mike as he was known to all, never lost his North-East accent. He was a trials fanatic and amassed a collection of machines over the years. He rode a Royal Enfield many times in the early years of the Pre’65 Scottish Trial and a BSA Bantam and was delighted when his trials riding son, Michael junior was successful in gaining an entry to this years’ Scottish Six Days Trial in May. An event the whole family looked forward to, as well as their annual visits to the Scott Trial in the October.

Mike was married to the hard working Dalmellington club secretary, Heather Anderson and father to daughter, Coral who has been involved in the sport as an observer for many years and latterly an official at the SSDT. He made his living as an opencast mine machine operator.

Funeral arrangements are as follows:

Tuesday 16th January at St. Brides Church of Scotland, Sanquhar, at 12.30 pm, 1:00pm at the graveside, thereafter to the Sanquhar Community Centre for a funeral tea where the family would like to invite all friends to join them.

Mike’s daughter Coral spoke to Trials Guru and said: “We have been overwhelmed with all the supportive messages, visits and flowers that we have received. It is so comforting to know that my Dad was loved by so many people”.

Trials Guru conveys condolences to the Anderson family at this sad time on behalf of the wider Scottish trials community.