The 2019 Highland Classic Two Day Trial – The SWM Edition will go down as one of the most memorable, with the 1979 FIM World Trials Champion and 1982 SSDT winner, Bernie Schreiber as the Inverness & District MCC Ltd’s Guest of Honour, taking centre-stage. Schreiber’s attendance being the first part of a global forty years celebration of the only USA rider to win a Trials title. 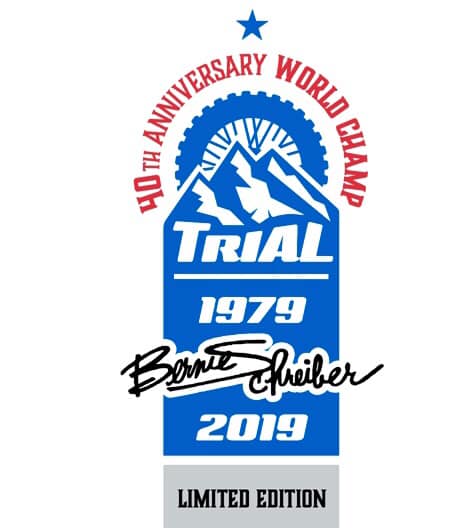 60 year old Schreiber didn’t just be the man of the moment, he rode the trial on a specially prepared TL320 SWM, supplied by MotoSWM.com of Cheddar, Somerset.

SWM UK supremo, Martin Matthews attended the event as  ‘Trial Partner’ to ensure that the machine fitted Bernie’s requirements during the weekend.

Here is a link to Bernie’s clothing Collection: Bernie Schreiber

But that was not all, Schreiber had carefully negotiated the use of the prestigious Alvie Estate facilities to host a special trials training and educational day on the Monday following directly on from the main event.

Aptly entitled the ‘Bernie Schreiber Experience’, it covered not only bike-craft, but a seventy-minute unique classroom session which was very well received by the twenty students.

The trial itself consisted of eighteen sections covered twice per day with a variation on the second day to keep riders on their toes.

It was hoped that former World Champion in 1981, Gilles Burgat would attend as Special Guest, but he damaged his shoulder at this year’s Scottish Six Days and was still recovering with a possible operation planned in the near future.

Schreiber told Trials Guru: “I really enjoyed my first visit back to Scotland in thirty-seven years. I was determined to add value to my role as the motor club’s guest and I think my input was not only well receive, but substantial. I stayed with the Inverness & District’s Company Secretary, John Moffat and we discussed many aspects of how to make a good event even better, I’m sure he will be taking quite a few of my suggestions and proposals to their board of directors. I thoroughly enjoyed my visit to Scotland and the scenery at Alvie Estate was breathtaking. I rode the first day with John and day two with Vesty and the company also helped make the visit that bit more special. I aim to return next year to the Highland Classic if I can, for their 2020 Fantic Edition.”

2 thoughts on “Highland Classic gets the Schreiber touch”