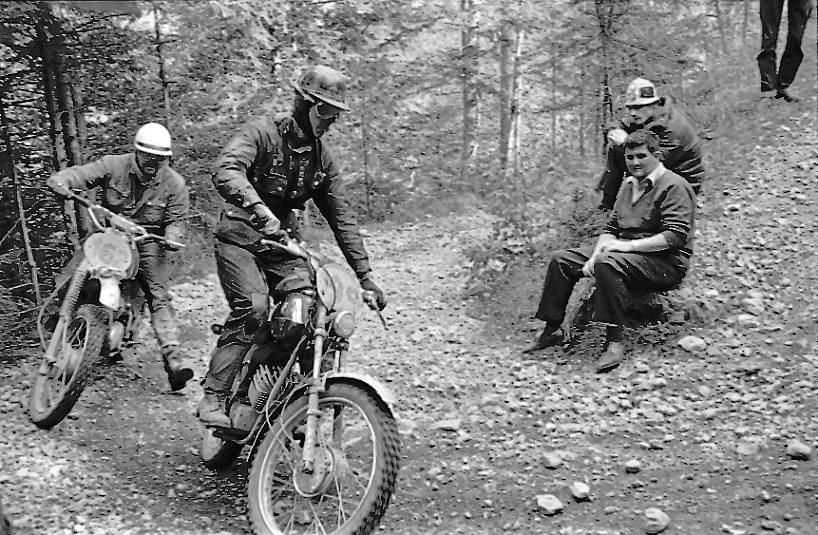 It is with much sadness that we report that the Edinburgh born trials and development rider, Derek J. Edgar has died this morning in St. John’s Hospital, Livingston on Tuesday, 28th March, 2017.

Derek had been ill for some time having been diagnosed with inoperable cancer and had been undergoing specialist treatment at Edinburgh’s Western General hospital for several months.

Younger son of Norman Edgar Snr who, with his brothers, ran the motorcycle sales and repairs business of Edgar Bros. in Edinburgh, Derek went to work for Steyr-Daimler Puch at their factory at Graz in Austria in 1970 as a development rider/engineer and then on to Montesa Motorcycles when he was based in California, USA.

He subsequently returned to his homeland Scotland and set up his own property development company called Derek Edgar Developments.

Derek’s older brother, Norman was three times Scottish Trials Champion and former Clerk of Course of the Scottish Six Days Trial an event in which Derek competed in on Puch, Bultaco and Honda machinery. His last ride was in 1977 on a Honda TL250.

Derek was an accomplished trials and scrambles rider who also excelled in the International Six Days Trial, riding Puch and Ossa machines from 1968 to 1972. He also took part in the Baja desert race in the USA.

John Moffat wrote: “I have known Derek Edgar from when I was a young boy, he dated a local girl called Theresa who later became his wife, who lived in my home town of Bathgate. He used to collect her in his Mini pick-up and would give me a friendly wave as he passed. Derek always had time to speak to me when I was a young rider and I never forgot that. He was one of a select band of Scottish competitors I looked up to and aspired to be like.

In Scottish trials, the Edgars were referred to in the same manner as Yorkshire-men referred to the Lampkins, they were a hard act to beat.

The Scottish trials world will be somewhat the poorer with Derek’s passing”.

A celebration of his life will be held at Mortonhall Crematorium, Edinburgh on Monday 10th April at 12.30.

Sincere condolences go to the extended Edgar family at this time and his widow, Theresa, son Paul and daughter Kim.